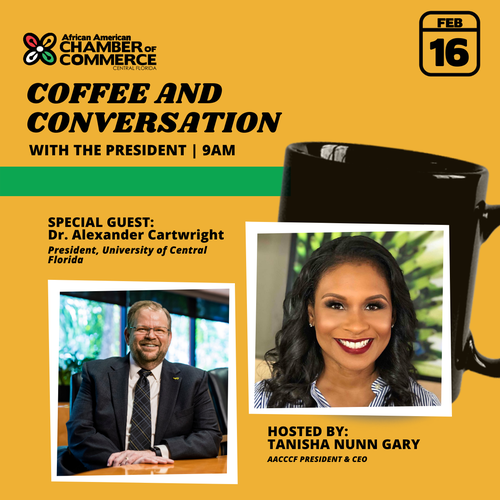 Tune in on Tuesday, February 16th for Coffee and Conversation with the President of the African American Chamber of Commerce of Central Florida, Tanisha Nunn Gary! This session, she’ll be joined by Alexander Cartwright, President of UCF.

Alexander Cartwright was selected as UCF’s sixth president by the UCF Board of Trustees on March 20, 2020, following a nationwide search. Prior to UCF, Dr. Cartwright served as the chancellor of the University of Missouri (MU). And prior to that, Dr. Cartwright was at the State University of New York (SUNY) for approximately 22 years, in progressive roles, including provost and executive vice chancellor from September 2014 to July 2017.

Dr. Cartwright is a native of the Bahamas, a first‐generation college student, an internationally recognized researcher and scholar in the area of optical sensors, a fellow of the American Association for the Advancement of Science, SPIE and the National Academy of Inventors.